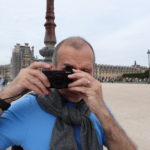 My hubs and I both like to take photos.  I am more of an “oh look, click, let’s go, maybe it turned out okay”.  He is much more methodical, taking his time and getting the best shot.

We were in Paris walking around.  Both of us have been known to piss people off by taking photos of them, their dog, their shoes, etc.  We weren’t doing any of this.  Just minding our own business discussing where to get a bite to eat.

And then he saw us.

I am not sure if he was homeless, on the way there, or just really eccentric.  For some reason he thought we were taking a photo of him.  Shit got real, quick.

Normally people just look at you with distaste.  They’ll get over it.

I have never been assaulted with French the way this man screamed at us.  “Do not take my photo!”  “No photo” “No camera”.  Since we were not taking pictures, we were a little perplexed.    I would except this of the woman whose dog was in a baby cart and I had to film it…. but first the guy was not doing anything that warranted a photo and second, we weren’t taking photos.

So the guy is screaming and wailing his hands around.  And then we both see it…..

He is in roller-blades.  As he comes toward us he stops.  Sits down, continues screaming “no photo”.  Then he looks down and realizes he needs to tie his skates.   We quickly retreated.

But the guy taught me a lesson.  I never really cared if you wanted your pic taken or not.  Now, if you are screaming in roller-blades, I think I’ll check to see if your laces are tied first. 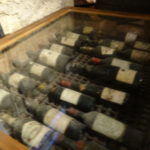 I have a problem.

Every trip my hubs and I take usually involves some sort of having wine.  And this wine usually is at the beginning of the day or the trip.  Never at the end of an evening where I can blame the prior glass (um, bottle).

Never fails.  We will be sitting there having a nice time.  For some reason my hand lifts up and throws the wine his way.  No reason.  I just knock it over.  Right on top of him.

A few years ago I almost ruined his brand new shirt.  This trip it went all over his pants, hoodie, everything.

Am I nervous?  Surely not. I have been with him for 8 years now.  There is nothing to be nervous about.

It always happens when we are in secluded places too.  Never really in a crowded restaurant or somewhere that I can blame others.

Perhaps the universe is telling me to start drinking white rather than red. 🙂

On a completely unrelated topic, we did visit the wine museum in Paris.  If you haven’t been I suggest you add this little token to your list.  It only take about 30 minutes and is quite good.  I have been to vineyards and still learned a bit about making wine.    Here is the link: Wine Museum